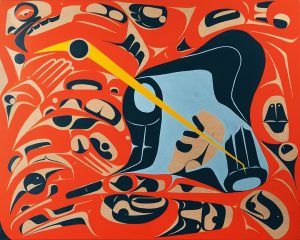 The Sheldon Jackson Museum is pleased to announce the opening of Filling Empty Spaces – Attraction and Distraction, an exhibition of new works by Robert Hoffmann (Tlingit). Join us for an artist talk on Saturday, January 14 at 2 pm. After Hoffmann’s talk, stay and enjoy the show and light fare sponsored by the Friends of Sheldon Jackson Museum.

Unable to attend in-person? Watch Hoffman’s presentation, including a slide show of art in the show, on Zoom. To attend via Zoom Jan. 14 at 2 pm, visit www.zoom.com and input meeting ID: 816 5128 2902 and passcode: Robert.

Hoffmann is one of three artists selected for the Sheldon Jackson Museum 2020-2023 Solo Artist Exhibition Series. The other artists are Allie High and Peter Williams.

Robert (Davis) Hoffmann, Xaashuch’eet, is originally from Kake. He is primarily a wood carver and painter, but has worked in multimedia sculpture and has recently been experimenting with casting. He is represented by the Stonington Gallery in Seattle, and his works can be found in private collections and museum collections including the Sheldon Jackson Museum.

In his artist statement Hoffmann says: “Through his carvings and paintings, Hoffmann explores cultural values, and to what ends they drive us in a search for fulfillment.”

In addition to being a visual artist, Hoffmann is an accomplished poet. His published works include Soul Catcher, Village Boy: Poems of Cultural Identity and his most recent book of poetry Raven’s Echo, just published by Arizona Press, Suntracks Edition. Hoffmann has also illustrated both books in the Raven House Mouse book series written by Jan Steinbright.

Filling Empty Spaces will be on exhibit at the Sheldon Jackson Museum until April 22, 2023. The proposal for the exhibition was selected by panel from over a dozen applications. The next Solo Show Exhibition Series will take place in 2023. Images of the exhibition will be posted on the Alaska State Museum website in the online exhibitions section and a recording of Hoffmann’s talk will be uploaded to the Friends of Sheldon Jackson Museum Youtube Channel.