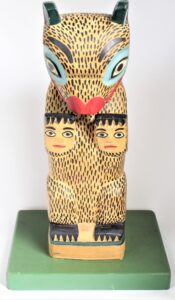 The Sheldon Jackson Museum April Artifact of the Month is a Tsimshian model totem pole by Eli Tait (SJ-I-C-12). The museum has eighteen model totem poles, but this is the only Tsimshian model pole and the only work by Tait in the permanent museum’s collection. It was donated to the museum in 1969 by Edna Rue.1 It is a very finely carved pole and has many of the signature elements of Tait’s carvings and of the Dynamic Phase, the era in which it was produced.
Eli Tait was born in Metlakatla in November 1872 and died in 1949 in his workshop. He was the son of Nis’awalp, John Tait, one of Metlakatla’s founders, and Margaret (Bolton) Tait. Tait married Cornelia Quinstead at age twenty-seven though their marriage ended sometime before 1910. Tait later married Maud Stuart or Davis and the couple went on to have two children, William and Ellen.

Both William and Ellen assisted Eli in his work. While Tait worked as a night watchman on fish traps, he supplemented his income with carving model totem poles, most of which he sold to cruise ship passengers. Because he had to use crutches due to debilitating arthritis in his joints, William and Ellen frequently carried the poles to the docks for him.
According to Michael D. Hall and Pat Glascock, the production of Northwest Coast Native-made model totem poles can be divided into four different phases which include the Emergent Phase, beginning in the late 19th century and lasting until WWI; the Dynamic Phase, starting in the early 20th century and running into the Great Depression; the Cosmopolitan Phase, beginning with the outbreak of WWII and running through the social and political turmoil of the 1960s; and finally, the Analytic Phase which commenced in the 1970s and has continued into the 21st century. All model poles, regardless of the era of their carving, are products of commerce between different, often competing cultures, and are shaped by the times and events transpiring within their carvers’ lifetimes.

The second phase, the Dynamic phase, was the period in which Tait was active. The Dynamic Phase reflected the advent of modernism and the great social, political, and technological change of the early 20th century – change that resulted in “a dynamic of accommodation and resistance among Northwest Native groups that invigorated their model totem production into the Great Depression.” (Glascock and Hall, 55) This period began in the wake of the 1909 Alaska-Yukon-Pacific Exposition in Seattle, which drew the world’s attention to the Pacific Northwest. After the exposition, tourism via cruise ship and railroad to Alaska and Western Canada burgeoned and curio shops, eager to meet consumer demand, sprang up throughout the region. Amidst the tourism boom, model totem poles became the definitive curio of the Northwest.
Unfortunately, the first generation of carvers in the Dynamic Phase faced increasingly strong efforts to assimilate and found their traditions and art forms discouraged. Commercialized art, however, including model totem poles, were ironically deemed desirable. Glascock and Hall point out that this dynamic enabled model totem poles to be a “subversive force” as the art form helped sustain Natives’ persistently threatened cultural identity. The pushback materialized in the bold and celebratory style of poles of the time – a stark contrast with the poles of the previous Emergent phase.

Model totem poles of the Dynamic era were imaginative, ambitious, colorful and increasingly diversified in appearance. At this time, artists, especially Salish, Nuu-chah-nulth, and Tsimshian carvers creatively combined styles and included pan-tribal crests and figures. They also began, for the first time, signing their work. Some artists used their full names or initials while others marked their works with their own unique carved and painted imagery in lieu of lettered signatures. With the Dynamic Phase came the first model poles with outstretched wings, though the April Artifact of the Month has none. Finally, model poles of this era tend to have very bright colors due to the newly available commercial industrial paints of the time.

There are a number of characteristics distinct to Tait’s model poles and many of these are present in the April Artifact of the Month. Even if the artist had not signed the back of the model totem pole in the form of a bear, one could surmise it was his work based off of the medium, color selection, application of paint, and great attention to detail. This model, like the rest of Tait’s identified model poles, is made of finely grained yellow cedar. This was the wood of choice for Tait while most of his counterparts preferred red cedar. His poles tended to be slightly smaller in form compared with similar poles. Signature details of the bear model pole include the old style cursive and inscription ‘Metlakatla Alaska’, always found, even if faded, on Tait’s carvings. Finally, the very fine details of the April Artifact of the Month indicate Tait’s hand. The ears of bears on his pole turn out slightly as opposed to being straight up. Extra care was taken to not just paint, but carve the eyes and faces in the paws of the bear. The stippling is not just haphazardly applied – it follows the contours of the bear’s body, especially the flow of the arms, legs, and forehead. Lastly, instead of just rounding the nose, Tait carved a sharp horizontal line running from eye to eye to define the nose. Tait is best known for having created the popular Good Luck Totem – a popular style of pole depicting an eagle with a salmon in its talons perched atop a seated bear. The museum does not have one of his Good Luck Totem poles in the collection, but perhaps someday one can be acquired.